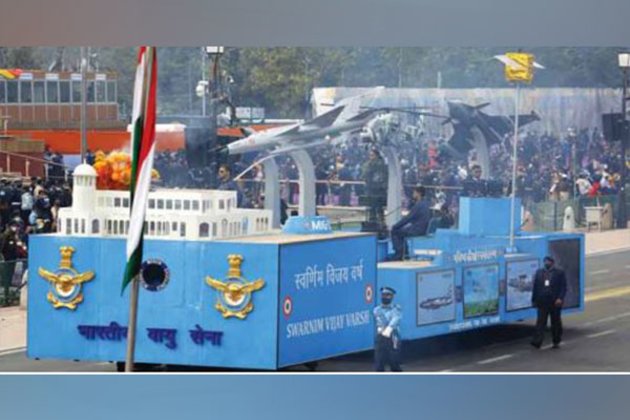 New Delhi [India], January 26 (ANI): The tableau of the Indian Air Force at the Republic Day parade on Wednesday displayed the theme 'Indian Air Force Transforming for the Future'.

MiG-21s strike worked as the final trigger to capitulate the adversary and bringing about a decisive victory in 1971 war.

Gnat, the first indigenous aircraft, armed with 30 mm Aden guns and rockets. Gnat, also known as 'Sabre Slayer; was considered to be the best aircraft to take on an enemy aircraft in and a dog fight.

Aslesha MK-1 is a three dimensional Low-Level Light Weight and multi-beam ground-based 3D Surveillance Radar. It is deployed in diverse terrains and has the capability to detect and track heterogeneous air targets, including helicopters, fighters and UAVs at low and medium altitudes.

GSAT 7A is a Geostationary satellite; it enhances IAF's Network Centric Warfare capabilities by interlinking all ground-based Radars, airbases, Airborne Early Warning and Control Radars for detecting aircraft and vessels.

Rafale with its advanced technology, equipped with a wide range of weapons is a game-changer to attain air supremacy.

A set of guidelines issued by the Centre states that those attending the Republic Day parade must be fully vaccinated against COVID-19 and children below 15 years of age will not be allowed to attend the function.

Visitors must carry proof of vaccination and must adhere to all COVID-protocols, such as wearing face masks and maintaining social distancing.

As many as 21 tableaux including those 12 states and nine ministries or government departments are a part of the Republic Day parade.

The celebrations this year are special as Republic Day falls in the 75th year of Independence, being celebrated as 'Azadi ka Amrit Mahotsav' across the country.

To mark the occasion, the Ministry of Defence has conceptualised a series of new events during the main parade on Rajpath on January 26 and the 'Beating the Retreat' ceremony at Vijay Chowk on January 29.

It has been decided that the Republic Day celebrations will now be week-long from January 23-30 every year. The celebrations commenced on January 23, the birth anniversary of great freedom fighter Netaji Subhas Chandra Bose and culminate on January, 30 which is observed as Martyrs' Day. (ANI)