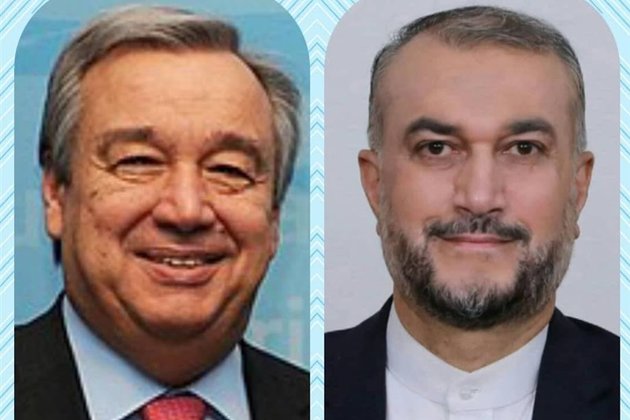 TEHRAN (Tasnim) - Iranian Foreign Minister Hossein Amirabdollahian and United Nations Secretary-General Antonio Guterres talked about various issues at a telephone conversation, including the Vienna talks on the revival of the JCPOA and the ways to resolve the crises in Yemen and Afghanistan.

In the telephone conversation with the UN chief on Friday, the Iranian foreign minister pointed to the situation in Yemen and an escalation of attacks on the civilian areas, reiterating Iran's ongoing approach on supporting a political solution to end the war in Yemen.

Amirabdollahian referred to the UN's approach on terminating the blockade as well as bringing about a ceasefire and holding political talks in Yemen, urging the secretary-general to play a more active role in the efforts to lift the siege and put an end to the large-scale bombardment of civilian regions.

Iran's foreign minister also stressed the necessity of paying special attention to the humanitarian crisis in Afghanistan and the situation of the displaced persons, adding, "Over the past months, the Islamic Republic of Iran has hosted about 800,000 newly-displaced people, something that demands serious international cooperation and efforts."

Amirabdollahian once again stressed the need for the formation of an inclusive government in Afghanistan and voiced Iran's preparedness to facilitate the dispatch of humanitarian aids by other countries and international bodies.

He further pointed to the talks in Vienna aimed at removing the sanctions against Iran, described the process as positive, and reiterated the Islamic Republic's serious determination to reach a good agreement in the shortest time possible.

Amirabdollahian reaffirmed the lack of trust in the White House's rulers and emphasized the need for America and the Western side to adopt practical, tangible and verifiable measures in order to prove the possibility of achieving a lasting and reliable deal.

For his part, Guterres welcomed and praised Iran's constructive positions in support of achieving peace and ending military attacks in Yemen as well as its attention to humanitarian issues and the start of political negotiations to resolve Yemen's problems.

The UN secretary-general also stressed the necessity of continued efforts to establish an inclusive government comprised of various groups and ethnicities in Afghanistan and to prepare the ground for all Afghan citizens, particularly women and children, to enjoy human rights and have access to education.

Guterres finally welcomed any progress in the process of nuclear negotiations on the removal of sanctions in Vienna and said the United Nations has constantly supported the achievement of the nuclear deal and international peace with all its resources and capabilities.