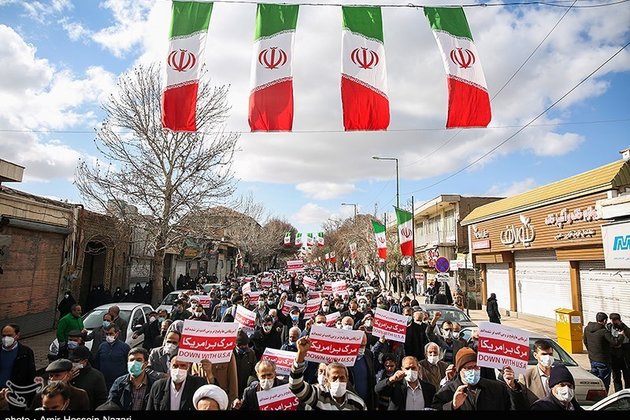 TEHRAN (Tasnim) - People of Iran staged demonstrations after the Friday prayers in condemnation of the massacre of Yemeni people in the military strikes launched by the Saudi-led military coalition.

Chanting slogans in support of the Yemeni people, the Iranian demonstrators protested against the muted response from the international organizations to the bloodshed caused by the Saudi-led military campaign.

Last week, a temporary facility in northern Sa'ada province of Yemen was struck, marking another deadly day in the Saudi-led war against already poverty-stricken country which has been going on since 2015.

Saudi Arabia and a number of its regional allies - including the UAE - launched a brutal war on Yemen in March 2015. The war was launched to eliminate Yemen's Ansarullah movement and reinstall former President Abd Rabbuh Mansour Hadi, a staunch ally of Riyadh. But the campaign, accompanied by a tight siege, has failed to reach its goals, although it has killed hundreds of thousands of Yemeni people.

The UN refers to the situation in Yemen as the world's worst humanitarian crisis. The war has also taken a heavy toll on the country's infrastructure, destroying hospitals, schools, and factories.