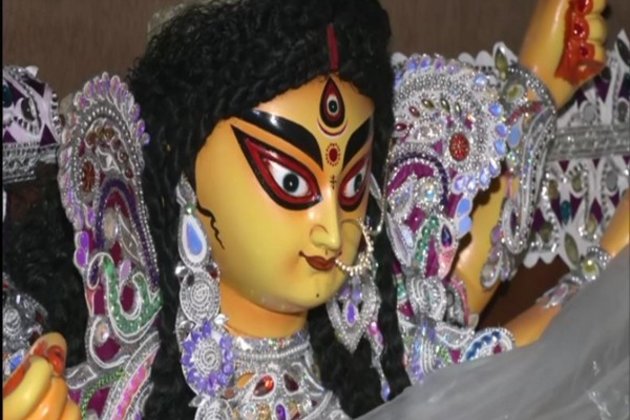 By Ujjwal RoyKolkata (West Bengal) [India], July 4 (ANI): With a few months left for Durga puja, idols of the goddess are ready to be sent abroad from Kolkata's Kumartuli.

Speaking to ANI, artist and clay modeller Mintu Pal said, "Every year before the annual Durga Puja festival, fibreglass Durga idols from Kolkata's Kumartuli are sent abroad. This year also, I have got orders for 11 Durga idols of which five Durga idols have gone to the US. Idols have been sent to Chicago, New Jersey and New York. One Durga idol is ready to be sent to Dubai."Pal said in the year 2020 and 2021, the budget of Puja was greatly curtailed due to the COVID pandemic and the number of idols exported abroad was also reduced.

"In the year 2019, we had sent six to seven idols abroad. Last year we were able to send only two to four idols. Due to the pandemic, there was literally no puja abroad. This year, I have got orders for 11 idols from abroad since new pujas are being organized abroad. I delivered seven idols abroad so far this year. The packaging of the idol which will be sent to Dubai has already been done," Pal explained.

"The idols to be sent to Japan, Canada and Manchester in the UK are being prepared. We also got orders for idols from Qatar and Colombia," he added.

Pal said all the idols that are sent abroad are made of fibreglass. It takes about a month to make such an idol. The making cost of such idols is about Rs 1.5 lakh while the delivery cost comes around Rs 1 lakh. So finally, each of these idols costs around Rs 2.5 lakh.

The idols are sent abroad by ship and it takes 2-2.5 months to reach the destination. So, the idols are generally sent 3-4 months in advance.

"The idols sent abroad have a maximum height of 9 feet. The height of the idol which will be sent to Dubai is 4.6 feet and the background behind it is around 7 feet. The Durga idol sent to New Jersey was around 8 feet. The idol which goes abroad will go by this month because it takes at least 2-2.5 months to reach," said Pal.

He further said, "In 2022, more idols are going to our foreign countries compared to the last two years. At least 100 idols of Durga are sent abroad from the Kumartuli area. The orders start coming January-February onwards. Now, the ordering is done online."He said the Durga idols that go to the pandals of Kolkata and other districts are made up of clay and preparations for those idols have also started since orders have started coming.

Pal said the price of raw materials has increased which hiked the making cost of the idols.

"The way we spend money in making the idols, we do not earn that much in return. But still, we are making the idols and sending them abroad so that Puja continues," he said.

He further said that so far 20-25 local orders have been received and many of them are from old customers. Pal makes around 40 Durga idols every year in his workshop.

Asked about the UNESCO listing Durga Puja in Kolkata as "Intangible Cultural Heritage of Humanity", Pal said, "This year Durga Puja will be celebrated with much pomp and show because of the UNESCO recognition. It is a very big thing. We hope that the puja budget will also increase. We hope for good business this year."In December 2021, United Nations Educational, Scientific and Cultural Organization (UNESCO) inscribed "Durga Puja in Kolkata" on the "Representative List of the Intangible Cultural Heritage of Humanity". (ANI)