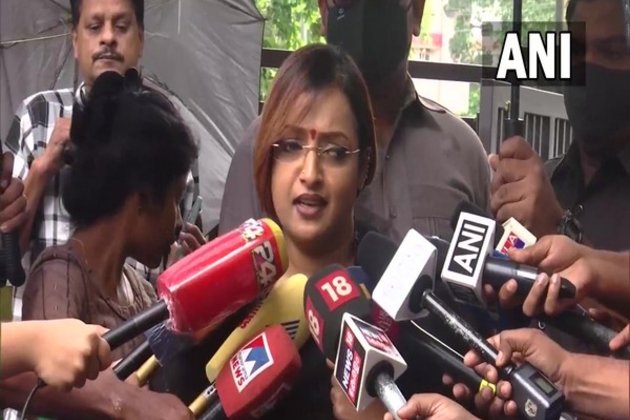 'No fear of arrest': Swapna Suresh appears before Crime Branch in conspiracy case

Kochi (Kerala) [India], July 5 (ANI): Swapna Suresh, prime accused in the Kerala gold smuggling case, appeared before the Crime Branch officials in the police club for interrogation in the conspiracy case registered against here on the complaint filed by CPIM MLA and former minister KT Jaleel.

"I have no fear of arrest. I didn't do anything to be afraid of. It is a fake case, charged overnight. It was initially bailable but was later made non-bailable. Let me face it," said Swapna Suresh.

Thiruvananthapuram cantonment police have registered a case against Swapna on Jaleel's complaint on June 8 this year seeking a probe into the charges made by Swapna against him in the Gold Smuggling Case and alleged that she conspired and made defaming statements against him.

The police registered the case under Section 153 (wantonly giving provocation with an intent to cause riot) and Section 120B (criminal conspiracy) against her.

She skipped the interrogation earlier this week when the Crime Branch issued a notice by citing the reason for ED questioning in the gold smuggling case.

The prime accused in the gold smuggling case Swapna Suresh on Wednesday said Chief Minister Pinarayi Vijayan had told lies in the Assembly on Tuesday and urged him to release CCTV visuals of Cliff House and Secretariat in view of the probe in the case.

"Yesterday, Chief Minister Pinarayi Vijayan talked a lot of things at the Assembly. It came to my notice that he had told a lot of lies in order to mislead the public by standing in a very sacred place," Suresh said to reporters today.

She added, "The Chief Minister said that he has often seen me with the Consul General. There is no MEA approval for such meetings. All these meetings were facilitated through me by his point of contact, that is Sivasankar. All these meetings are against the protocol."She demanded the Chief Minister to release the CCTV visuals of Cliff House (official residence of Kerala CM) and Secretariat from 2016 to 2020.

"After 7 o'clock at night along with the Consul General, I went to Cliff House for secret meetings for their requirements. Also, I had gone alone there earlier. You can see in those visuals that there was no security check for me to go there. It is not ethical to mislead people by standing in the Assembly with so many blatant lies like saying that you do not know Swapna Suresh," alleged Swapna.

In the Assembly on Tuesday, Vijayan said Swapna is a person who is accused of gold smuggling and other cases and the Congress-led Opposition is treating her words as the ultimate truth and using them here.

He also referred to her as someone who is now being guided by Sangh Parivar forces.

Swapna early this month testified before a magistrate under Section 164 (5) where she claimed that Vijayan and his wife and their daughter Veena had smuggled currency to the UAE.

Swapna said it was she who had facilitated numerous meetings with the UAE Consul General at the Chief Minister's residence which was against all protocol as permission was not taken from the Ministry of External Affairs.

On July 5, 2020, 30 kilograms of 24-carat gold worth Rs 14.82 crores was seized by the Central Board of Indirect Taxes and Customs at Thiruvananthapuram Airport from a diplomatic bag that was meant to be delivered to the UAE Consulate in Thiruvananthapuram.

M Sivasankar, the principal secretary to Kerala CM Pinarayi Vijayan, was suspended and removed from the post after a preliminary inquiry confirmed that he had links with Swapna Suresh, one of the accused in the National Investigation Agency (NIA) probe. (ANI)