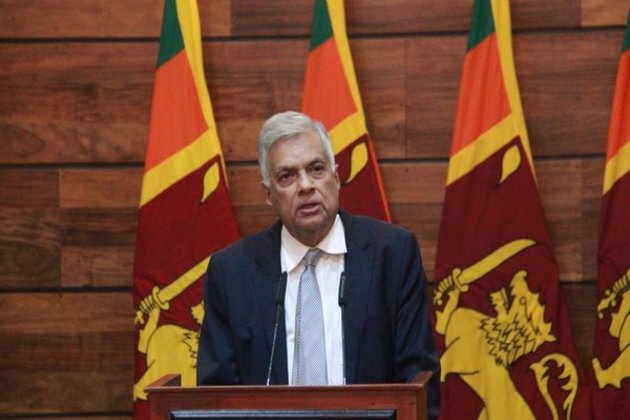 Colombo [Sri Lanka], July 5 (ANI): Sri Lankan Prime Minister Ranil Wickremesinghe on Tuesday said that the island country aimed to reduce the inflation rate to between 4 and 6 per cent by 2025.

In his speech in Parliament today regarding the economic recovery plan, the Prime Minister of the crisis-ridden country noted that due to the current inflation, the value of money in the Employees' Provident Fund and the Employees' Trust Fund has been reduced by 50 per cent.

Sri Lankan PM also said that the real value of pensions has also decreased by 50 per cent.

In order to strengthen the rupee and reduce inflation, Wickremesinghe said that they have implemented a plan to limit the printing of money in the future.

"In 2023, we will have to print money with restrictions on several occasions. But by the end of 2024, it is our intention to stop printing money completely," he added.

Sri Lankan PM pointed out that the state enterprises have incurred huge losses. As of March 31, 2021, Sri Lankan Airlines owes Rs 541 billion. As of May 31, 2022, the Electricity Board owes Rs 418 billion and Petroleum Corporation owes Rs. 1.46 trillion.

The economic crisis has particularly impacted food security, agriculture, livelihoods, and access to health services. Food production in the last harvest season was 40 - 50 per cent lower than last year, and the current agricultural season is at risk, with seeds, fertilizers, fuel and credit shortages.

"We have now prepared the necessary background for the successful harvest of the next season. All measures have already been taken to provide chemical fertilizers without shortage. Provisions for seeds and planting materials are allocated through the interim budget," Sri Lankan PM said.

Wickremesinghe said that the country has started a programme to increase food availability in collaboration with the World Food Program and the Food and Agriculture Organization.

He also said that the upcoming interim budget will allocate money to provide short-term relief to the highest sections of society. And that relief will be given to the people under the Social Welfare Benefits Act.

Earlier, Janatha Vimukthi Peramuna (JVP) leader MP Anura Kumara Dissanayake boasted that he is capable of restoring Sri Lanka's economy in six months. After this, Sri Lankan PM challenged Dissanayake to revive the country's economy within the time frame given by him.

"It would be great if he has a plan to restore the country's economy within six months. With such a plan, we will be able to restore the economy in a short period of time. Not only that, but it also sets a good precedent for the world," said the Sri Lankan Prime Minister.

PM Wickremesinghe said that taking a country whose economic growth has fallen to a negative six or seven to a positive economic growth rate in six months is an action that has never happened in any country in the world.

Taking a jibe at JVP leader, Wickremesinghe further advised Dissanayake to present the plan of the country's economic revival to President Gotabaya Rajapaksa or to the Sri Lankan Parliament as that plan would win him the Nobel Prize in Economics.

"That is why I am asking MP Anura Kumara Dissanayake to submit this plan to the President. If you don't want to go to the President, present it to this Parliament. Let us discuss it in this Parliament. If that plan is better and more effective than the plan we are implementing now, we will implement it. Such a plan would be brilliant enough to win the Nobel Prize in Economics," said Wickremesinghe.

"So if there is such a plan, I am ready to resign and let him take up this position. I am ready to give up my position and support that program. Because the positions I hold are not new to me. At a time when the country has become anarchic and no one has taken responsibility, I have not accepted this position out of the desire for the chair," he added.

He further stated "if there is a more effective plan than the one we have presented, if there is a faster plan, then present it. We can discuss it. Run it if the most effective path to recovery."Wickremesinghe said that the island country is participating in negotiations with the International Monetary Fund (IMF) as a bankrupt country.

"Our country has held talks with the IMF on many occasions before. But this time the situation is different from all those previous occasions," he said in Lankan Parliament.

"We are now participating in the negotiations as a bankrupt country. Therefore, we have to face a more difficult and complicated situation than previous negotiations," Wickremesinghe said.

The Prime Minister further in the speech said that once a staff-level agreement is reached, it will be submitted to the IMF Board of Directors for approval.

Sri Lanka has been facing the worst economic crisis since independence in 1948, leading to an acute shortage of essential items like food, medicine, cooking gas and fuel across the island nation.

The country, with an acute foreign currency crisis that resulted in foreign debt default, had announced in April that it is suspending nearly USD 7 billion foreign debt repayment due for this year out of about USD 25 billion due through 2026. Sri Lanka's total foreign debt stands at USD 51 billion. (ANI)