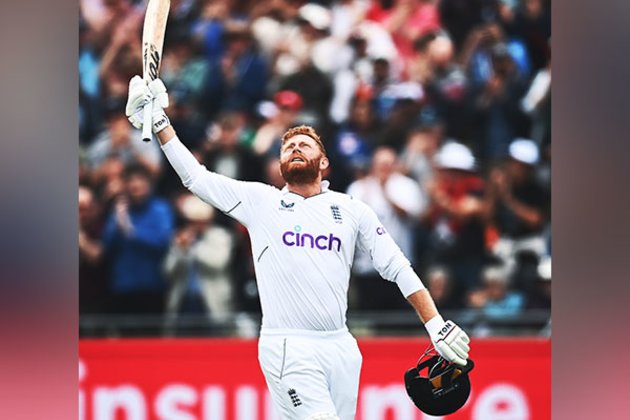 Birmingham [UK], July 5 (ANI): Following his side's seven-wicket win over India, England batter Jonny Bairstow said that he is not afraid of failing and just wants to put pressure on the opposition.

A 269-run partnership between Joe Root and Jonny Bairstow helped England create history, with the side completing their highest successful run chase ever in the longest format of the game with a seven-wicket win over India in the fifth and final Test of the series at Edgbaston in Birmingham.

They were able to successfully chase down the target of 378 runs set by India. This win comes after England was bundled out for 284 in the second innings of the game, trailing the game by 132 runs after India posted a massive 416 in the first innings. India was bundled out for 245 in the third innings of the match, setting a target of 378 for England to win.

With this, England has levelled the series 2-2, denying India their first series win on English soil since 2007. They have also completed the most successful run chase at Edgbaston. India has also been handed over their first Test loss while defending a total of 350 or more.

Jonny Bairstow was adjudged as the 'Man of the Match' for his twin centuries, scoring 106 and 114 in both the innings. He ended the series with 404 runs in five matches at an average of 50.50. He scored two centuries and one fifty in the series, with the best individual score of 114.

"It is great fun at the moment. The last month has been fantastic for the lads and the smiles on their faces when everyone does well is a massive part of it. I am stripping it back to the basics. The last few years have been tough on me but the last few months have been fantastic. Fair play to everyone who went through that. To the crowd as well: Day five was over in 90 minutes. I just have an enjoyment factor now. I am not afraid of failing and just want to put pressure on the opposition," said Bairstow in a post-match presentation.

"We are going to lose games with the approach we have, but it is a positive fun brand of cricket to play. The chase was all under control (laughs). They have some world-class bowlers and you just have to soak the pressure. They try to intimidate, they have some fantastic players and it was about trying to shift the pressure on them. There are going to be phases when they are going to play really well. There was a period when it started reversing as well. And today morning was a different morning. Root and I are just two lads from Yorkshire. We have grown up playing together and spent a lot of time together from the Yorkshire academy days to the Test team now. Special to play with him," he added.

The duo's strokeplay and determination did not change on the final day as they continued punishing the Indian bowlers from the start. They completed their 200-run and 250-run partnership without breaking a sweat. Bairstow and Root continued their purple patch with the bat, reaching their 12th and 28th Test tons respectively. It was Root who hit Jadeja for the winning single in the 78th over of the game.

A 150-run stand between Jonny Bairstow and Joe Root helped turn things in favour of England at the end of the final session of Day Four of the ongoing fifth and final Test against India at Edgbaston in Birmingham on Monday.At the end of the day's play, England's score read 259/3, with Root (76) and Bairstow (72) standing tall. Indians were left clueless by the determination and strokeplay of both in-form batters.

England resumed things off after Tea at 107/1, with opener Alex Lees (56) and Ollie Pope (0) standing unbeaten at the crease.

India got an early wicket in the first over after Tea as Jasprit Bumrah sent back Pope to the pavilion for a three-ball duck after wicketkeeper Rishabh Pant successfully caught the ball which hit the edge of his bat.

In the next over, Lees was run out by the pair of Mohammed Shami and Ravindra Jadeja. England lost their third wicket at a score of 109 runs.

After this, the in-form duo of Joe Root and Jonny Bairstow resumed the chase for their side. The duo formed a fifty-run partnership. Root-Bairstow continued to inflict punishment on Indian bowlers, suddenly shifting things more in England's favour.

A hundred-run stand was up between Bairstow and Root in 141 balls. Indian bowlers could find no answer to the batting of these two as they kept piling up runs. Both brought up their half-centuries and also completed their 150-run stand in 196 balls.

Root-Bairstow made sure that their team walked out of the final session without any further damage, needing 119 runs to win and level the series.

Earlier before Tea, England openers Alex Lees and Zak Crawley struck a century partnership after captain Ben Stokes led from the front taking four wickets to bowl out India for 245 in the second innings as the visitors set a 378-run target for hosts.

Resuming the post-lunch session at 229/7 India lost Mohammed Shami in the fourth ball of the Tea session as English captain Ben Stokes dismissed him for 13. From there on there was no looking back for the skipper as he also went on to dismiss first-innings centurion Ravindra Jadeja who chopped the ball onto his stumps for 23 as the hosts lost their ninth wicket for 236.

In his next over Stokes dismissed Indian captain Jasprit Bumrah for seven to bowl out India for 245.

The hosts set visitors a 378-run target. Chasing a big total England needed a solid start and their openers Alex Lees and Zak Crawley did exactly that scoring runs at a brisk pace. The duo struck a 50-run partnership with southpaw Lees being the aggressor of the two. Southpaw Lees went on to score his half-century in just 44 balls. The opening pair of Lees-Crawley carried on and they reduced the target to less than 300.

The duo took the team to the triple-figure mark to put pressure back on India. Just when it seemed that the game was going away from India their skipper Bumrah struck cleaning up Zak Crawley for 46. Hosts lost their first wicket for 107 and this score remained till Tea session as they needed 271 more runs to win with nine wickets in hand.

India resumed Day Four at 125/3, with Cheteshwar Pujara (50) and Rishabh Pant (30) at the crease. The duo went on to add 28 more runs to their fifty-run stand before Pujara was dismissed by Stuart Broad for 66 after he was caught by Alex Lees at the backward point.

This brought Shreyas Iyer to the crease.

Pant continued his good batting form, getting to his half-century after making a superb 146 in the first innings. Iyer also hit Broad and Matty Potts for fours, before he was dismissed by Potts for 19 after being caught by James Anderson at mid-wicket while attempting to pull.

Ravindra Jadeja was next at the crease. Pant's knock ended at 57, being dismissed by spinner Jack Leach after being caught by Joe Root at slips.

Shardul Thakur was next up on the crease to join Jadeja, but fell cheaply for just 4, with India losing their seventh wicket on the score of 198.

The duo of Mohammed Shami and Jadeja took India through the remainder of the session without any damage.Going into lunch, Ravindra Jadeja (17) and Mohammed Shami (13) stood unbeaten at the crease for India. India maintains a healthy 361-run lead in the match.

Mohammed Siraj was the star for India with the ball, taking 4/66 while Jasprit Bumrah took 3/68. Mohammed Shami and Shardul Thakur got two and one wickets respectively.

For India, superb centuries by Rishabh Pant (146) and Ravindra Jadeja (104) and a late blitz by stand-in captain Jasprit Bumrah took the team to a total of 416 in their first innings. Jadeja and Pant had put on a stand of 222-runs to help India recover from a scary position at 98/5.

During the 84th over of the first innings, India's stand-in captain smoked English pacer Stuart Broad for -- 4,5w,7nb,4,4,4,6,1 -- a total of whooping 35 runs of which 29 runs went to Bumrah's account. This established world records of most runs conceded by a bowler in an over in Test history and most runs hit by a batter in an over in Test history.

James Anderson was the pick of the bowlers for England in the first innings taking 5/60. Matty Potts also took 2/105.