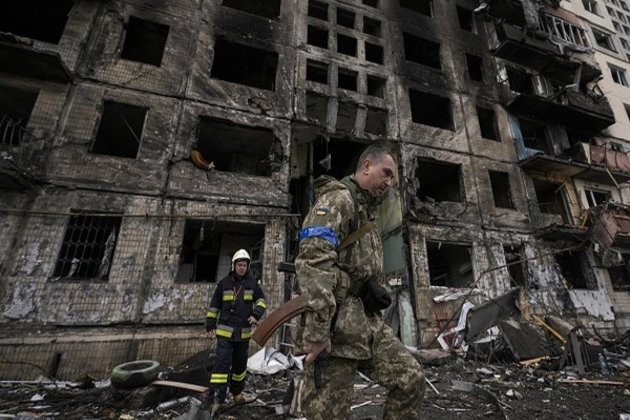 By John SolomouNicosia [Cyprus], September 19 (ANI): The surprising and blistering advance of Ukrainian forces into Russian-held territory in Ukraine this month has most probably led several Middle East countries, which a few months ago were seriously studying a possible re-alignment towards Russia, to re-examine the whole question and try to improve their relations with the United States.

Ukraine's military this month has managed to recapture more than 3,000 square miles of land in the country's northeast and south, causing a big strategic loss for Kremlin and driving Russian forces into a chaotic retreat.

This retreat shows the dismal shortcomings of Russia's military planning, coordination and execution of military operations.

The Russian Defense Ministry described the retreat as a decision "to regroup" its troops, even though a day earlier it had said that it was moving to reinforce its defensive positions in the region. It is really a far cry from the boasts made at the start of the invasion that "Kyiv will be conquered within 72 hours" and "a Russian puppet-government will be installed in Ukraine in days."What was almost unthinkable 7 months ago, at the start of the invasion, is that the war in Ukraine, instead of being a war ending in a few days- as Russian President Vladimir Putin planned- would evolve into a war of attrition.

It showed the world that the vaunted and "mighty Russian Army" is not the formidable fighting machine almost everybody believed a few months ago, but an unorganised army facing a lot of problems.

The change in the military situation in Ukraine must have made decision-makers in the Middle East and especially in Saudi Arabia, the United Arab Emirates as well as Egypt, re-examine their perceptions about the "powerful Russia" and the important role it plays in the Middle East, as well as about the US as an unreliable ally who is withdrawing from the region.

In the last 20 years, Moscow turned its attention to the Middle East, providing economic and military aid and supporting diplomatically various governments in the region. In September 2015 Russia send its troops to Syria to support the regime of President Bashar al Assad and has since launched numerous air and missile strikes against the ISIL, the Free Syrian Army and the Al-Nustra Front, who were trying to topple the Syrian regime.

It should be mentioned that Russia has its only naval facility in the Mediterranean region in the Syrian port of Tartus, which is widely believed to be a chief motivating factor for Russia's support of the Assad regime.

Following the nuclear deal (JCPOA) signed by the US and other western powers with Iran - the arch-rival of the Gulf States and Israel - which placed significant restrictions on Tehran's nuclear program in exchange for sanctions relief - as well as the humiliating US retreat from Afghanistan, the impression was given in the Middle East that the US was not so much interested in the region and its attention was focused on China and the Pacific islands.

They now saw the US as an unreliable ally and started viewing Russia, as the dominant superpower, which could provide protection from Iran and its proxies. So, they started getting closer to Russia, closing deals and buying weapons from Moscow, which unlike Washington did not link arms sales to respect for human rights.

In Egypt, the Russian state atomic energy corporation Rosatom last July began construction of the country's first nuclear power plant, with four 1200MW reactors, at an expected cost of 25 billion euros. It will be Moscow's largest project in Egypt since the Aswan Dam was completed in 1970.

Saudi Arabia, which is the world's top arms importer and accounted for about 24 per cent of US arms exports, on 24 August announced that Deputy Defence Minister Khalid bin Salman signed an agreement with Russian Deputy Defense Minister Alexander Fomin "aimed at developing joint military cooperation between the two countries."Salman also met with Russian Defense Minister Sergei Shoigu, who said that Russia had many new weapons systems that have "proven themselves well in Syria."The fact that Gulf countries and particularly Saudi Arabia and the UAE chose to sit on the fence and refrained from strongly condemning the Russian invasion of Ukraine and just called for "a political settlement" is quite telling.

The Saudis and the Emiratis are angry with the US Administration and President Biden in particular because they feel that Washington had not really supported them when Iranian-backed Houthis launched missile strikes against targets in the two Gulf states. They are also angry because the US is trying to revive the Iran nuclear deal, ignoring Saudi and Emirati objections.

Moreover, as Russia drastically cut its gas supplies to Europe, Gulf States did nothing to cover the energy shortfall. The OPEC countries, including the UAE, Saudi Arabia and Qatar, have refused to increase their production and decided to stick to a deal previously agreed upon between member states.

To this day, all these countries together with Egypt, Turkey and Israel refuse to apply Western sanctions on Moscow.

However, all this may change, due to the poor performance of the Russian military and Russian weapons in Ukraine that have exploded the myth of Russia being an invincible superpower and may make them look to Washington once again for their defence and also consider the alternative offered by Beijing.

As Herb Keinon, points out in an article in Jerusalem Post: "Egypt and the Gulf states, which still feel threatened by Iran and had recently looked to Russia for arms, now will look elsewhere, as the Russian war machine fumbles in Ukraine. This will lead to a possible realignment, with nations casting their eyes toward Beijing and Washington... A badly weakened Russia will create enhanced dependence on the US by regional countries, which is bad for Iran." (ANI)