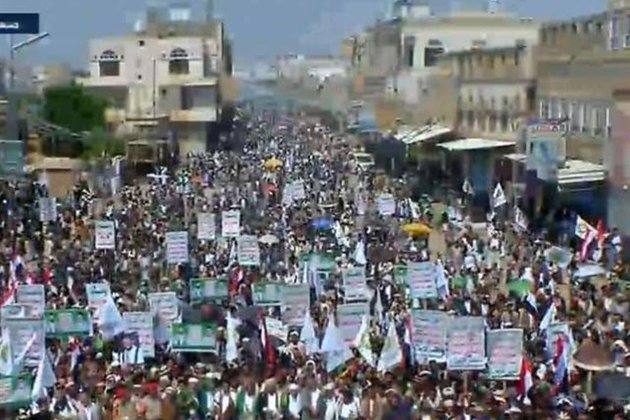 TEHRAN (Tasnim) - Yemenis poured into the streets in the northwestern city of Sa'ada and other parts of the country on Wednesday to voice their deep resentment over the Saudi-led coalition's acts of aggression and war crimes against Yemen.

The demonstrations came on the eighth anniversary of the September 21 Revolution of Yemen.

The Sa'ada protesters waved national Yemeni flags, carried banners in condemnation of the Riyadh-led airstrikes, held up pictures of the former leader of the popular Ansarullah movement Hussein Badreddin al-Houthi and its current chief Abdul Malik al-Houthi, and shouted slogans against the aggressors on Wednesday afternoon.

The demonstrators made it clear in a communique that the September 21 Revolution was an authentic uprising staged by the entire Yemeni society, and not provoked by any foreign country.

The statement pointed out that the revolution put an end to foreign tutelage, and its notable achievements turned it into one of the most honorable and successful revolts of the present world.

It underscored that Yemeni people from all strata of the society are tough-spirited and wholly committed to the path of resistance against the brutal Saudi-led aggression until full independence is restored, and every inch of the Yemeni soil is liberated from the clutches of invaders.

The statement went on to commend the Ansarullah leader for his sagacity and prudence as to leading the Yemeni nation and thwarting the enemies' conspiracies and seditious plots.

It also hailed the mass participation of all Yemeni tribes in the September 21 Revolution, emphasizing that they made generous contributions in this regard in order to preserve their faith, values, pride, identity and moral principles.

The statement stressed that the National Salvation Government will spare no effort to improve the Yemeni nation's livelihood through reforming state institutions and supporting social solidarity and popular fronts.

The participants in Sa'ada march also lauded last week's massive military parade in the capital Sana'a, and the strong steadfastness and resilience of Yemeni army troops and fighters from allied Popular Committees.

They called on the Riyadh-led coalition of aggression to stop its aggression and lift its crippling siege on Yemen.

The statement stressed that the September 21 Revolution cannot be constrained within Yemen's borders, as it has serious impacts on regional and international developments, and maintains a firm and principled position vis-a-vis the Palestinian cause.

In 2014, the people of Yemen led a popular uprising against the Saudi-backed unpopular regime of Abdrabbuh Mansour Hadi.

As protests gripped the country, the Ansarallah resistance movement on September 21 took control of the capital Sana'a following a rapid advance south from their northern stronghold of Sa'ada.

The massively popular protests were against the incompetent and corrupt regime in Sana'a backed by Riyadh.

In a bid to crush the resistance and reinstall the Hadi regime, a Saudi-led coalition launched a ferocious bombing campaign on the neighboring Arab country barely six months later.