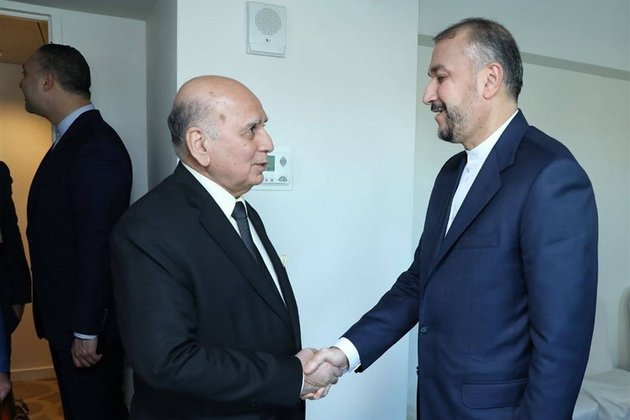 TEHRAN (Tasnim) - Highlighting Iraq's efforts to mediate between Iran and Saudi Arabia, the Iraqi foreign minister said Baghdad is ready to host a fresh round of negotiations between Tehran and Riyadh.

In a meeting with Iranian Foreign Minister Hossein Amirabdollahian in New York on Saturday, Fuad Hussein pointed to the positive trend of the talks between Iran and Saudi Arabia, saying Baghdad is prepared to host a new round of negotiations between the two.

Iraq will continue to do its best to this end and invites Iran and Saudi Arabia to normalize their ties and reopen embassies in their capital cities, he stated.

Hailing the historical, cultural and religious bonds and commonalities between Iraq and Iran, Hussein said Baghdad is ready to make the ties flourish, advance and develop as much as possible.

For his part, Amirabdollahian thanked the Iraqi government and people for their generous hosting of the Arbaeen pilgrims and expressed satisfaction with the strategic ties between Iran and Iraq in various spheres.

He added that Iran and Iraq have a huge potential for expansion of relations and that the public and private sectors of the two countries are capable of further realizing the existing possibilities through implementing operational plans.

Amirabdollahian also referred to the US officials' meddlesome stances against Iran in recent days, saying all people have a right to attend peaceful gatherings.

He strongly criticized Washington's interference in Iran's internal affairs, including provocations and aiding rioters and those who abuse the pure feelings of the people of Iran, saying they are pushing for destabilization and killing projects in the Islamic Republic.

The Iranian foreign minister said such moves are at odds with repeated diplomatic messages from the White House to Iran regarding the necessity of reaching a deal and creating stability and security in the region, the Foreign Ministry's website reported.

Elsewhere in the meeting, the two senior diplomats exchanged views about the Arbaeen march, bilateral ties and cooperation agreements, regional issues including the developments in Yemen and Ukraine, the latest results from the Iranian-Saudi negotiations in Baghdad, and the sanctions removal talks.