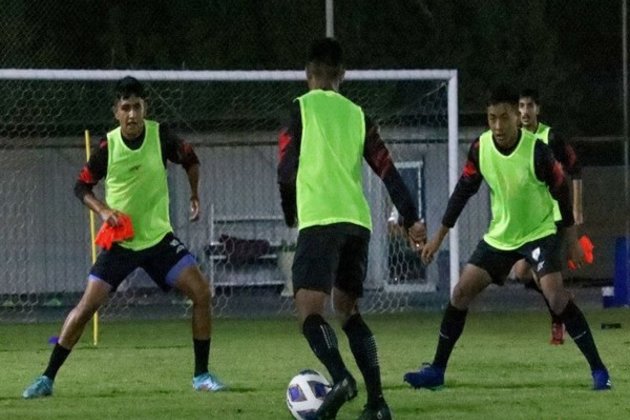 Al Khobar [Saudi Arabia], October 1 (ANI): These are hopeful days for the India U-17 National Team, as they close in on their last few days of preparation for the AFC U-17 Asian Cup 2023 Qualifiers.

Amidst the high-rise buildings of Al Khobar, the lesser-known twin city beside Dammam on the Persian Gulf, the Blue Colts, coached by Bibiano Fernandes, have already come to terms with the local conditions.

Being clubbed against the likes of Maldives (October 4), Kuwait (October 6), Myanmar (October 7), and Saudi Arabia (October 10), the expectations are high that Bibiano's boys will follow in the footsteps of the last two batches and qualify for the AFC U-17 Asian Cup (formerly known as the AFC U-16 Championship).

"We have put together a good squad of players over the last year, I consider ourselves the underdogs, purely because we are largely untested at this level of competition," said Bibiano Fernandes. "But the important thing is that the boys are motivated for these matches and we hope that we can get the results."India have the second-best record amongst the Group D teams, having had eight successful qualification campaigns for the AFC U-17 Asian Cup (formerly known as the AFC U-16 Championship), with their best result coming in 2002 and 20018 when they made it to the quarterfinals. They face some stiff competition from the hosts Saudi Arabia, who have played the main competition 10 times and won it twice (1985 and 1988).

Amongst the other teams, Kuwait have qualified five times and made it to two quarterfinals (2004 and 2012), and Myanmar have qualified four times, but have never managed to make it past the group stage in the tournament proper. Meanwhile, Maldives are yet to have a successful qualifying campaign in this age group.

"It's going to be a tough proposition for all the teams in this group. I believe that all five teams are very competitive. Past records do not matter. What matters is how well the teams are prepared for these four matches," said the head coach.

Building this squad of a new batch of boys has not been an easy task, and it is one that the technical staff of the team has pored over for months before fixing on the final 23, who they feel are best suited for the job.

"We have been in camp constantly since February, and there have been so many players that have come and gone in the initial phase. Once we narrowed it down to a pool of around 35 players, it was all about chipping away at the rough edges, in order to get them ready for this stage, said assistant coach Kanan Priolkar.

"It's always crucial to identify the potential players who could peak later on and then groom them towards their target. It's not always about the face value that you see in front of you, and that's where the judgement factor about the players becomes crucial," he continued. "We have tried to blend a mixture of two. Of course, those that we can see are fit enough for this level, and those that have good prospects for the future. They all need to be groomed in the correct manner to produce the next generation of senior players."Goalkeeper coach Felix Desouza is someone who has gone through at least 12 goalkeepers since February, before finally fixing on the three that are representing the Blue Colts in the AFC U-17 Asian Cup 2023 Qualifiers.

"Selecting the goalkeepers is a lot about the philosophy of the team, and how best the keepers can help the rest of the players. The goalkeepers play a crucial role, and if they are out of sync, then the whole team can suffer," said Desouza. "As a goalkeeping coach, I would need to put my own philosophies aside and see what best suits the team, and work likewise. In our team, we encourage our keepers be more comfortable with the ball at their feet. That way, we get an extra player on the pitch when we're in possession."Indeed, the goalkeepers of the U-17 National Team are often, in training, seen to be playing in the back four, rather than between the sticks, with their teammates often commenting that they are doing as good a job as any other in the squad of 23.

"We have three very good keepers in our squad, but the sad thing is that only one of them gets to play," Desouza said. "I always feel that even if a certain player is my third choice keeper at the moment, and they show the capacity of learning fast and the potential to be much better, I would always keep them under the radar as long as I can."The overall feeling in the camp is one of determination. It has been six long months together for this team, and they are at the final stages of the target that they had set out to achieve.

"You can really feel it with the boys. They are all giving it their best in training, they all want to be on the pitch in these four matches," said Bibiano Fernandes. "It's always a sacrifice for footballers. These are young kids who are having to stay away from friends and families, especially during the festive times. Not everyone can cope with such things, but these guys are very understanding and fully motivated." (ANI)