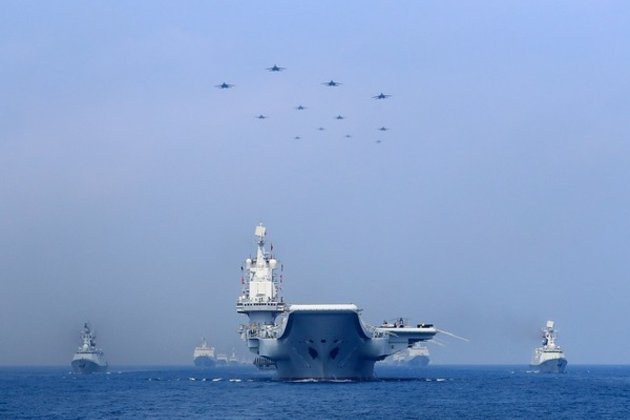 Washington [US], December 5 (ANI): China has numerically the largest navy in the world with an overall battle force of ships and submarines, said a Pentagon report last month which also highlighted how Beijing is seeking to establish a robust overseas presence to allow the People's Liberation Army (PLA) to project military power.

"The People's Liberation Army Navy (PLAN) has numerically the largest navy in the world with an overall battle force of approximately 355 ships and submarines, including approximately more than 145 major surface combatants," said the Pentagon titled "China's Military Power Report 2022."Writing for The Diplomat magazine, defense analyst Prakash Pannerselvam said the PLAN presence in the Indian Ocean has been growing steadily since 2009.

"When piracy and hijacking ships for ransoms in the Gulf of Aden were disturbing global energy and trade routes, China joined the international effort to police the regional waters. Even today, a major justification for the PLAN presence is to ensure the security of their commercial engagements and maritime trade," said Pannerselvam, who is an assistant professor with the International StrategicSecurity Studies Programme, National Institute of Advanced Studies (NIAS), Bengaluru.

Since 2013, Chinese submarines have been in the Indian Ocean, and they claim to be deployed for anti-piracy duties, he adds.

According to the US report, the PLAN is largely composed of modern multi-role platforms. In the near term, the PLAN will have the capability to conduct long-range precision strikes against land targets from its submarine and surface combatants using land-attack cruise missiles, notably enhancing the People's Republic of China's (PRC) global power projection capabilities.

The Pentagon report states the PRC is enhancing its anti-submarine warfare (ASW) capabilities and competencies to protect the PLAN's aircraft carriers and ballistic missile submarines.

"As the PRC's overseas interests have grown over the past two decades, the Party's leaders have increasingly pushed the PLA to think about how it will develop the capabilities to operate beyond China's borders and its immediate periphery to advance and defend these interests," the report said.

The US Defence Department said this has led to the PRC's greater willingness to use military coercion--and inducements--to advance its global security and development interests.

It says that PRC is "seeking to establish a more robust overseas logistics and basing infrastructure to allow the PLA to project and sustain military power at greater distances."Beyond its base in Djibouti, Pentagon says that the PRC is pursuing additional military facilities to support naval, air, ground, cyber, and space power projection.

A global PLA military logistics network and PLA military facilities could both interfere with U.S. military operations and support offensive operations against the United States as the PRC's global military objectives evolve, it adds. (ANI)