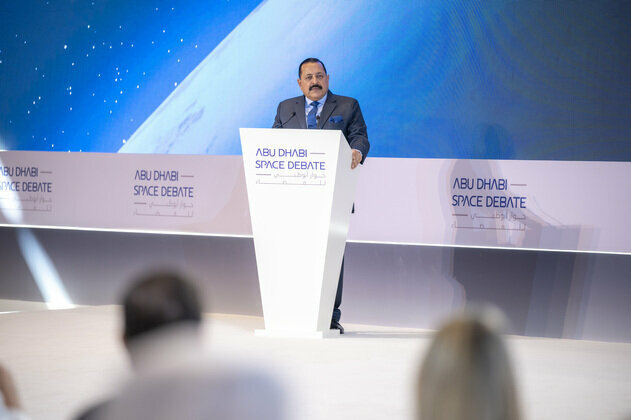 Dr Jitendra Singh said, development of the space sector is one of the priority areas for the leaders of both India and the UAE and added that India started its space journey seven decades back from a scratch and is today acknowledged to be a leading space power.

He said, the highlight of India's journey has been its thrust on indigenous development through dedication and hard work of its scientists guided by the commitment of the leaders.

Dr Jitendra Singh said, the indigenously developed space sector of India and the fast-growing space sector of the UAE have a lot of complementariness that can be harnessed.

He said, if we want to ensure that the space remains a sector to serve our shared humanity, it is important to bring all the stakeholders together to discuss and deliberate about the space and in this regard, this platform has the potential to shape the future of the space sector.''

The Minister said, the Indian space industry today is renowned across the globe for two things - reliability and economy.

India is proud to have the maximum success ratio in the world for its flagship space launching vehicle - Polar Satellite Launch Vehicle or PSLV. Just a few weeks back, India's PSLV launched 36 satellites including for countries from both the developed and developing world.

The Minister also congratulated the UAE for planning its second human space mission next year by sending four astronauts in space for six months. The launch of Rashid Rover, UAE's Moon Mission in the near future, and creation of the Space fund are milestones which reflect the commitments and determination of the UAE to excel in the space sector.

He shared that India's active space partnership with the UAE dates back to 2017, when our PSLV launched UAE's first nanosatellite - 'Nayif-1' meant for collecting environmental space data.

Dr Jitendra Singh appreciated the thrust of the Abu Dhabi Space Debate for building the role of Governments in empowering space business and technology.

He said, the list of discussions in ADSD on the role of the space sector to solve the climate issues, bringing accountability to environmental commitments, threats to and from space to the political discourse and making the presence of private sector and space innovation people driven that serve humankind; are very relevant to our time and are eye-opening topics, setting apart this initiative from any other such gathering in Space sector in the past.

Dr Jitendra Singh concluded by saying that he is confident that the Abu Dhabi Space Debate will grow in stature in the coming years and become a pre-eminent platform for discussions in space related matters and take India-UAE space cooperation into an entirely different and much higher spatial orbit.