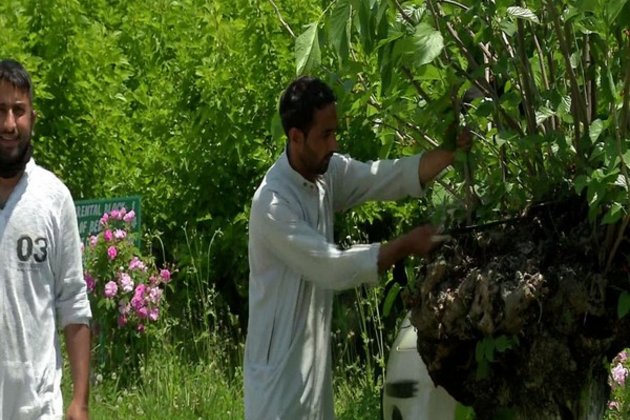 Srinagar ( Jammu and Kashmir) [India], December 10 (ANI): The erstwhile state of Jammu and Kashmir is the only region that produces the best quality Bivoltine silk in the world. Due to a congenial climate, conducive to the production of world-famous Indian silk products, other products of international grade have also their origin in the valley.

According to India Brand Equity Foundation (IBEF), India is the second-largest producer of silk in the world. The country's sericulture industry employs around 9.76 million people in rural and semi-urban areas.

The industry is one of the main contributors to foreign exchange reserves in the country. The sericulture activities in India are spread across 52,360 villages. India produces four types of natural silks; Mulberry, Eri, Tasar and Muga. The country produces silk garments, made-ups, fabrics, yarns, carpets, shawls, scarves, cushion covers and accessories through raw material, it added.

The share of mulberry production is the largest among other types of silk produced in the country.

The major silk-producing states in the country are Andhra Pradesh, Assam, Bihar, Gujarat, JammuKashmir, Karnataka, Chhattisgarh, Maharashtra, Tamil Nadu, Uttar Pradesh and West Bengal. Karnataka contributed around 32 per cent of the total silk production in the country during 2021-22. This was followed by Andhra Pradesh which had a share of 25 per cent in the overall silk production during 2021-22, statement added.

On a global level, silk accounts for about 0.2 per cent of total textile fibre production, according to the International Trade Centre (ITC) report 2000.

Moreover, the average incomes of the farmers practising sericulture as an additional agro enterprise are reported to be Rs 3,840 per month with a total monthly expenditure of Rs 2,380, the report added.

It requires a meagre capital of Rs 500 to create one job against Rs 10,000 or more per job in the organised industrial sector, it said.

According to IBEF, silk fabrics and made-ups, and silk readymade garments are the most exported silk products from India with 2021-22 exports share of 45.3 per cent, and 36.3 per cent, respectively. The share of other products in India's total silk exports is as follows - silk waste (11.3 per cent), silk carpets (4.3 per cent), and natural silk yarn (2.8 per cent).

India's silk and silk products are highly demanded throughout the world. The country exports to more than 30 countries around the globe. Some of the top importers are the US (29 per cent), followed by UAE (10 per cent), China (8 per cent), the UK( 4 per cent), and Australia (8 per cent) of the total export share as of 2020-2021, as per IBEFOther top importers include countries like Germany, France, Italy, Spain, Malaysia, Nepal, Japan, Belgium, Canada, South Africa and Singapore. (ANI)