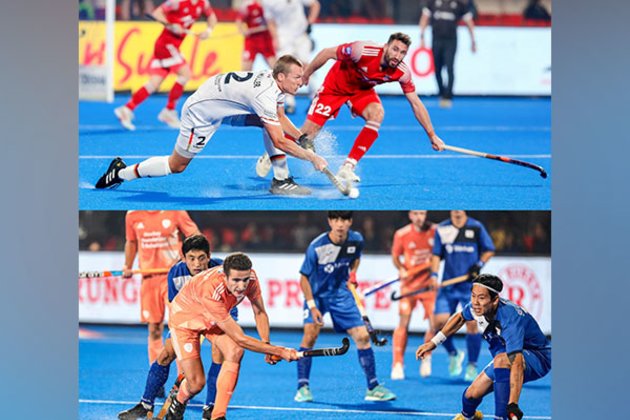 Bhubaneswar (Odisha) [India], January 25 (ANI): Germany beat England 4-3 in a shootout after the match ended 2-2 draw at full time of the quarter-final to enter the semifinals of the ongoing FIH Men's Hockey World Cup 2023 here at Kalinga Stadium on Wednesday.

In the waning seconds of the third quarterfinal of the FIH Men's Hockey World Cup 2023, Germany grabbed a victory away from England. Germany, after being 0-2 down for the first 56 minutes of the game, came back brilliantly to make it 2-2 at the end of the match and then beat England 4-3 in Shoot-Out to march to the semi-final.

The former champions, on the other hand, shown no signs of pessimism and continued to advance quickly. Around the same time, a green card made England more vulnerable. Germany gambled by withdrawing their goalkeeper, and it paid off. They tied the game and compelled a shootout.

German goalkeeper Jean-Paul Danneberg made two saves while two of his teammates' four efforts in the shootout were successful. Germany advanced to the semifinals with a score of 4-3 and will take on Australia there.

In another quarter-final clash, the Netherlands thrashed South Korea 5-1 to book a semifinals clash against Belgium. The Dutch turned out to be too good for the Koreans who had upset Argentina in their last game.